We wanted to incorporate textile art, story-telling and audio technology into a unique project that would draw together a diverse group of participants.

We held our workshops in a public library situated in downtown Flushing, a densely populated urban area of Queens, NY. A large percentage of local residents are first- or second-generation immigrants, especially from China and Taiwan.

Participants included a variety of demographic groups: first- and second-generation Asian immigrants from the surrounding community; experienced quilters of diverse backgrounds from different parts of Queens; and students from nearby Queens College. We had both men and women quilters, and ages spanned from young adults to senior citizens.

We advertised the workshops via flyers in the Flushing Library; through email lists administered by Queens Library, Queens Memory, Queens College and local arts organizations; and through the social media outlets of all the participants, including our four quilting instructors. We had our flyer translated to reach out to the large number of Chinese-speaking patrons at the Flushing Library.

Interviews – participants as well as instructors were asked to share their or their families’ stories of migration (whether from another country to the U.S. or from another state to New York) and crafting traditions. These stories were recorded at the sessions and edited clips have been embedded in the quilt via LilyPad circuits.

Public Art – the finished quilt, which measures 8 by 8 blocks, is being exhibited in several venues throughout the borough and will ultimately be permanently displayed at the Flushing Library.

Making – attendees of the workshops learned to create quilt blocks using a variety of hand sewing techniques, as well as how to attach the blocks to backing material and turn them into a completed quilt. Participants in the last few sessions also learned how to incorporate the LilyPad circuit boards into the quilt using conductive thread.

Textile – many types of materials and threads were used for the project, and quilters sampled numerous crafting techniques, including sanding and slicing denim; embroidering; measuring and cutting fabric to patterns; and quilting around a traditional wooden frame.

We consider the workshop series to have been very successful. It resulted in the formation of a lively, diverse group of participants who contributed to the physical end product — a work of textile art imbued with the migration stories of its makers — in a variety of ways. We were gratified by the dedication, enthusiasm and camaraderie that our quilters brought to the project, and we learned a tremendous amount from them along the way. 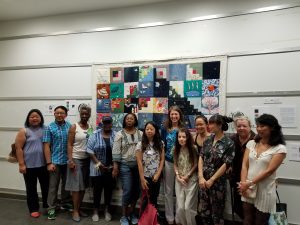 The audio from each of the 21 quilt blocks that feature our migration stories are available on YouTube.

As this was a complex project, we were unsure at the outset how large or complete our end product — the story quilt itself — would be. Due to the enthusiastic participation of the quilters and our instructors, the quilt turned out to be a sizeable work of art that was indeed complete and ready for exhibition by the end of the summer. We have since had several additional opportunities to display the quilt and share its stories (with more planned in the coming months), exceeding our initial expectations by far.

The project’s technology component — specifically, wiring the LilyPad circuit boards and sewing them to the quilt — proved to be the most challenging. The placement of the devices in relation to the buttons that activate the audio clips must be very precise, and we found ourselves running short of time in the last weeks. Completing this part of the project, which was critical to the quilt’s functioning as a “talking” work of art, required many extra hours in the studio from Naomi, Natalie and several of our most dedicated participants. In a future iteration of the project, we would build in more time to account for these tasks and perhaps also look for ways to make the delicate components and connections more sturdy.

Staff and management at Flushing Library

Fabric, thread and other materials from NYC Materials for the Arts